Piet Lombard of Thebe Turnstone Drilling gives us insight into the world of mining.

Turnstone Drilling was started in 2007 and has an operational fleet of 40 surface drill rigs, with various drilling range capacities and a client base spread across all commodities, including precious metals, ferrous metals, base metals and coal. Through this transaction Thebe Turnstone has achieved broad-based black economic-empowerment (BBBEE) thresholds in line with the requirements of the Mineral and Petroleum Resources Development Act and the Mining Charter.

“We believe that the acquisition was strategically beneficial to both parties. There are growing opportunities to service mining companies, especially for majority black-owned companies. We have been able to penetrate the market and grow significantly, despite the challenges the mining industry are facing,” says Piet Lombard of Thebe Turnstone Drilling.

The mining industry is a particularly tough business to be in at the moment. “The depressed market due to commodity prices which are so weak globally, combined with labour laws and disputes, makes it quite nerve-wracking,” says Lombard.

He is optimistic about the future. “We recently secured an underground contract, which bodes well for us. This opens up the opportunity for more underground drilling, which is not easy to secure,” Lombard explains. To be successful, one needs to have a strong underground section, and that is what Thebe Turnstone Drilling are working at achieving.

“We are also looking at expanding into Africa and see what we can offer Africa. With our vast experience and specialised skills in diamond drilling and other underground aspects, we are sure to provide a much needed service in Africa,” Piet says.

It takes real commitment and strength to face the challenges so positively and to embrace the opportunities for growth. Thebe Turnstone Drilling is a force to be reckoned with. 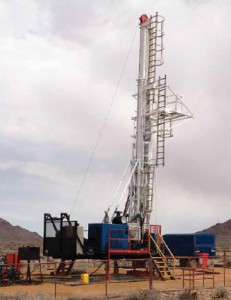