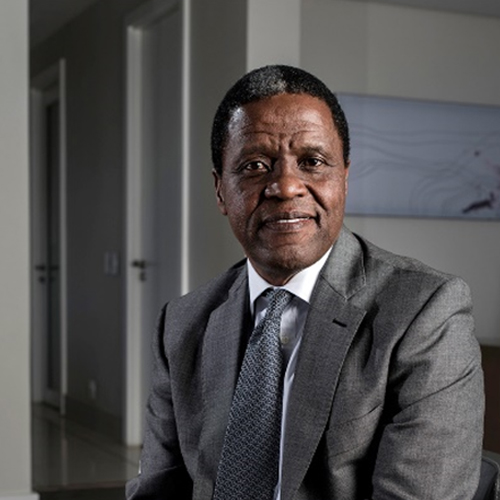 Former Chairman of the Board and CEO:
TIC Member of the State-Owned Enterprise Council

Bab’ Khanyile officially retired from the Thebe Investment Corporation as its Non-Executive Chairman of the Board of Directors on 30 October 2020, bringing to an end an illustrious 28 selfless years of dedication and servant leadership at Thebe. He devoted his entire life to the organisation, initially as its first Managing Director / CEO, thereafter as the Executive Chairman and lastly as Non-Executive Chairman. In all these roles Mr Khanyile served with true diligence, passion and humility, nurturing Thebe and its people through its peaks and troughs while growing the business from strength to strength over the years.

He served as an inspirational, charismatic, and fearless leader of Thebe since 1992, taking the business from a R100 000 seed capital to an investment company that today has over R11 billion Total Assets (R8 billion Equity Value). We can count many companies where Mr Khanyile has been quite instrumental, such as Thebe Property Asset Management (1993), KayaFM (1997), Cape Union Mart (2000), 25% in Shell (2002), Compass Group (2010). The list is too long to mention.

In June 2020, Bab’ Khanyile was appointed by President Cyril Ramaphosa to join the Presidential State-Owned Enterprises Council (PSEC) to support government reposition state-owned enterprises as effective instruments of economic transformation and development. A community activist for most of his adult life, Bab’ Khanyile has participated in numerous development programmes and community-based organizations. He serves on several Boards where he continues to impact business and society.